SiriusXM Radio program director for the reggae station The Joint, Pat McKay said; “Island Head is an important project to reggae. It’s always great to have substantive, high art. This work contributes to reggae’s growth. Reminds others of what it really is and what is still possible. I feel so especially blessed to share this brilliant work with our audience.”

Live musicians jamming to classic reggae from Bob Marley, Studio One classics and Island Head’s own version of familiar songs.

Hear Island Head on reggae radio stations around the world! 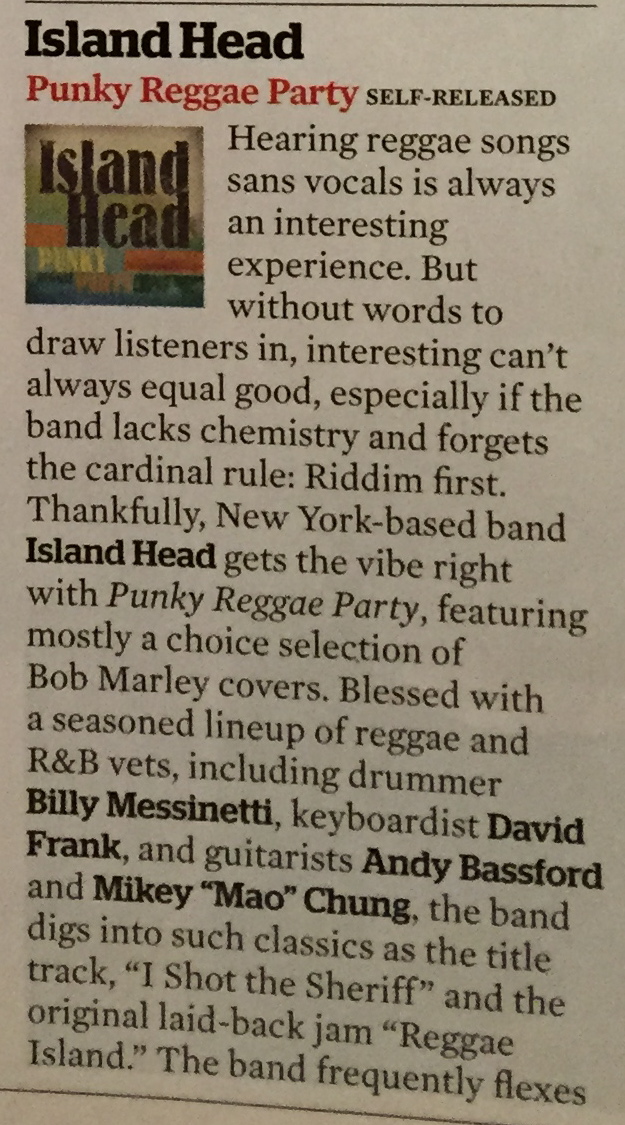 Watch the video highlights from one of our live shows: https://youtu.be/W_HGeF5uv3A

Island Head played to a packed SRO crowd at The Falcon in Marlboro, NY this past Saturday night. The band featured Timmy Cappello on sax and lead vocals, Andy Bassford as well as reggae legend Mikey ‘Mao’ Chung on guitars, bandleader Billy Messinetti on drums, Jeff Ganz on bass, James K. Smith on trumpet (subbing for Don Harris) and Mitch Margold on keyboards (subbing for David Frank).  Both James and Mitch have played with Island Head before so the reggae groove had the right pulse!

The band played their versions of classic Bob Marley songs as performed on their album “Punky Reggae Party” as heard on SiriusXM radio The Joint.   Other songs performed included “Baby I Need Your Loving” by The Four Tops, “I Shall Be Released” by Bob Dylan and the classic “House of The Rising Sun”.

They surprised the audience with two new songs to the set. “Take Me To The River” was done uptempo to almost a ska beat.  One of the most interesting arrangements was the band’s rendition of Richie Haven’s Woodstock classic “Freedom” to a soca-like groove. Timmy tore the house down with these two songs.  Whew!!

Check back here at IslandHeadReggae.com for information about getting a copy of the live recording of the show.

Island Head’s next live gig is Saturday November 21, 2015 at a fantastic venue called The Falcon.

Island Head’s trumpet player Don Harris and bass player Neil Jason played The Falcon with Blues Brothers’ guitar player John Tropea.  Island Head bandleader/ drummer Billy Messinetti attended the show and was very impressed with the club and the whole concept of what they have going on.  Don and Billy had a conversation with owner Tony Falco.  Tony said, “people say we don’t have enough reggae music or reggae bands in the club”.  All agreed Island Head would be a great fit.

The band will have legendary guitarist Mikey “Mao” Chung in from Jamaica, keyboardist/producer David Frank is flying in from Los Angeles and guitarist Andy Bassford is returning that day from his tour with Jamaican Jazz pianist Monty Alexander.

Island Head will be playing their own versions of Bob Marley compositions, tracks from Jamaican Reggae Producer Clement “Coxsone” Dodd’s Studio One Rocksteady and Reggae classics.  Island Head’s bass player Jeff Ganz is a student of these classics and the bass is the foundation of those grooves.  The band will also throw in some American classics with a reggae feel sung by Saxophonist Timmy Cappello.  Timmy had been touring the states appearing at “Mad Monster Parties”.  These are “meet and greet” conventions for fans of vampire movies.  Timmy performed the theme song “I Still Believe” in the vampire movie classic “The Lost Boys” and is well-known by fans of the movie.

Tony Falco is an avid supporter of great music and fine art.  There is something going on at The Falcon almost every night. Tony finds very talented and interesting acts.  Besides hosting live music you can find artwork from local painters hanging on the walls that Tony encourages his patrons to purchase.  Some of the finest musicians in the world have sought out The Falcon to perform there.  They have a large stage suitable for a small concert hall.

Click here for more information about the show:  SHOW LINK

The latest review of the album “Punky Reggae Party” by Island Head is by DJ Paulo Matos from Solar FM “Reggae Portugal”.

“What a piece of art!”
“I confess that this is one of the best tributes/instrumental tribute to the immortal songs of Marley The Wailers I ever heard until today!  Arrangements and Production are first-class.  This Sunday I will feature the album in Portugal Reggae program.  Not to be missed.”