Mikey was a member of Word, Sound and Power recording and touring with the late Peter Tosh. He was also a member of Island Record’s Compass Point All Stars with Sly & Robbie and The Inner Circle.

All of your favorite reggae bands/artists are on Spotify. Playlists are a great way to keep them ready to hear. For your convenience, here is a link to instructions on How to create playlist folders; https://support.spotify.com/us/article/playlist-folders/

Please be sure to include some Island Head in your list. By far, our version of “Burnin’ and Lootin'” is the clear hit for us on Spotify.

Big Up to all the fans of reggae from around the world.

Congratulations to Island Head’s guitarist Andy Bassford for his contributions to the album, Sting & Shaggy “44/876”. The album won the Grammy for “Reggae Album of the Year” in 2019. Andy not only played guitar on 4 songs, he also co-wrote the songs he played on.

For years Andy has worked on almost every Shaggy recording project. Shaggy’s producer, who goes by the moniker Sting International, was brought on to produce the album. He brought in his regular rhythm section players that he uses on his reggae sessions, including Andy. Sting was excited to work with authentic reggae musicians of such high caliber. And, the rest, as they say, is history. History for sure with the winning of the Grammy.

P.S. 44/876 refers to the country codes to phone the countries of Jamaica and England.

SiriusXM radio has been very kind to Island Head. Their reggae station, The Joint, was the first radio station in the world to play Island Head. Program Director Pat McKay, selected the song “So Much Trouble In The World” to be the unofficial single off the album “Punky Reggae Party”.

Pat McKay has very high praise for the band. She said; “Island Head is an important project to reggae. It’s always gr8 to have substantive, high art. This work contributes to reggae’s growth. Reminds others of what it really is and what is still possible. I feel so especially blessed to share this brilliant work with our audience.”

Island Head are humbled and honored to have such luminaries of the reggae music world to offer such high praise.

It seems our song, Reggae Island is getting lots of attention in the UK on reggae radio. Spotify and Amazon Music are seeing lots of requests for streaming the song. This instrumental reggae jam, written by Island Head’s drummer Billy Messinetti and trumpet player Don Harris. The song was intended to be heard while enjoying a backyard BBQ with some friends or sitting on a beach with a cocktail. You might enjoy it with your morning coffee. Whatever gets you going. If you are a fan of reggae music, it is a fun song. Enjoy!  Peace & Love!!!

Here is the link to the  video of Island Head’s version of the Bob Marley classic “I Shot The Sheriff”. This reggae classic was originally recorded by Bob Marley and The Wailers. Island Head recorded an instrumental version of the song with a unique arrangement including a guitar solo by Andy Bassford and sax solo by Tim Cappello. Other band members include drummer Billy Messinetti, trumpet player Don Harris, keyboard player David Frank, guitarist Mikey ‘Mao’ Chung and bass player Neil Jason.

The video is basically a photo montage of the recording sessions and the making of the album.

I Shot The Sheriff video

Support for the reggae community, reggae artists and reggae music

PLEASE, if you know any radio stations that support the reggae community, let us know and we will blog about it. If you are a DJ and would like us to help promote your show, let us know about that as well.  info @ islandhead.com

Here is the information we have gathered:

iHeart Radio – create your own radio station like a “Bob Marley” station or island or reggae type station and Discovery will bring you Island Head.

If you are a radio DJ/personality and would like to obtain a copy of the “Punky Reggae Party” album, please send us an email.

You can go out and hear some Irish music on St. Patrick’s Day or you can do what they do in the Caribbean, jam with a reggae band!

Island Head will be performing at The Falcon in Marlboro, NY. Make your reservations early for Friday March 17, 2017. The band always packs this fantastic club. But, because it is St. Patrick’s Day we are expecting a sell-out performance. You will want to get there before the 8:00pm downbeat for dinner. The food is quite good!

The Falcon is in Upstate Ulster County. Here is the link to The Falcon website

Come out and see live musicians jamming to classic reggae from Bob Marley, Studio One jams and Island Head’s own original songs. There will be some musical surprises!! 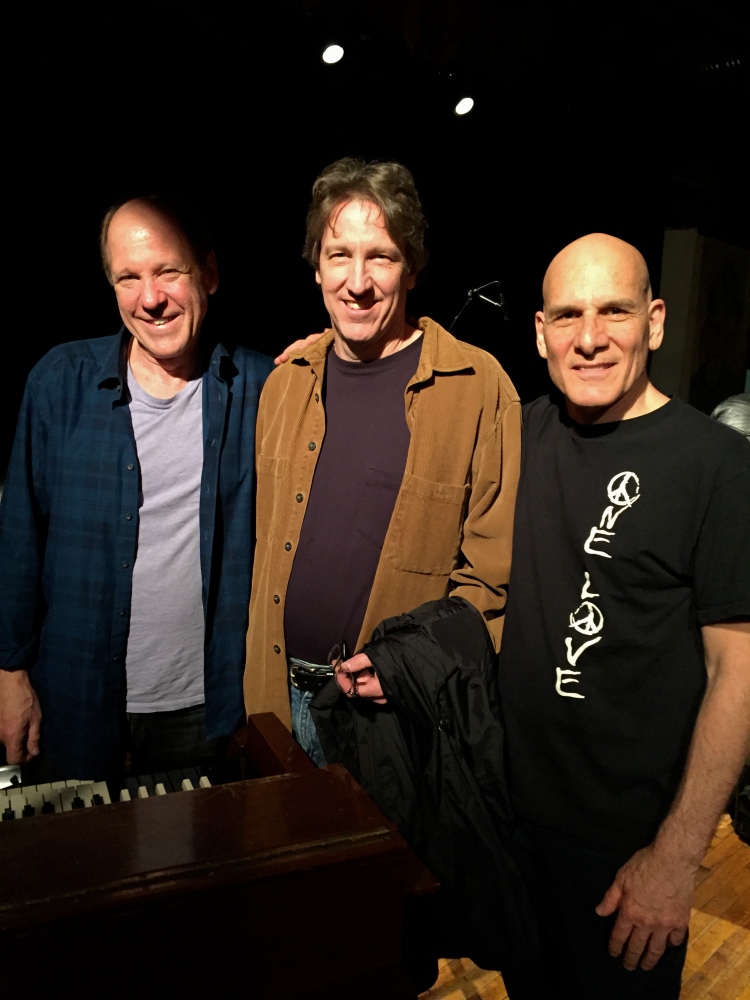 Thank you to all who came out to see Island Head at The Falcon!  What a fantastic night, so much fun!!  Special thanks to Island Head’s keyboard player, David Frank.  David flew in from LA to do this gig because he just loves playing the music with this group of amazing players.

The band opened the night with classic Jamaican instrumentals from the Studio One collection called “Tunnel One” by legendary reggae sax player, Tommy McCook and “Darker Shade of Black” by Soul Vendors. The latter is actually an excerpt from The Beatles song “Norwegian Wood”.

When Sax player/vocalist Timmy Cappello introduced the band’s version of “Baby I Need Your Loving” by The Four Tops he said; “We have such a symbiotic relationship with Jamaican reggae musicians and artists.  They write songs, we make them our own.  We write songs and they give that grace and that thrust with a whole new feel”.

One of the highlights of the band’s set was their version of “Freedom” by Richie Havens. The groove was kind of a Soca/Reggae thing which had the whole crowd on their feet.  Don and Timmy took advantage of their wireless clip-on microphones and were dancing with the audience and played amazing solos.

Keyboard player David Frank’s band, The System had a big hit called “Don’t Disturb This Groove”. Island Head did a version with a groove called “”Rockers” that was originated by the legendary drummer/bassist duo Sly & Robbie. “Rockers” is kind of a half-time feel with the bass drum playing quarter notes (4 on the floor).

Of course, the band played most of the songs from their album “Punky Reggae Party” that has been heard on reggae radio especially SiriusXM “The Joint” channel 42.  They closed the set with a furious version of Bob Marley’s “I Shot The Sheriff” that featured an energetic funky drum solo by Billy. The crowd would not let the band leave so quickly and demanded an encore.

The encores included the classic “House of The Rising Sun” done Island Head reggae style. The final song took the audience by surprise as the band ripped into a cool reggae version of “Kiss” by Prince. There was not one person left sitting!